New nitinol-alloys offer improved strength and low temperature performance. With very high plateau stresses, nitinol-based medical devices, such as vascular guidewires and orthodontic arch wires, can be built to produce greater forces in downsized wire thicknesses. Beyond medical, nitinol-based space components can be built with beneficial superelastic properties even at cryogenic temperatures. Fort Wayne Metals has developed a group of NiTi based super-elastic (SE) alloys that have upper plateau strengths above 1.0 GPa (1000-1500 MPa) and lower plateau strengths above 600 MPa.

Figure 1 compares the room temperature loading and unloading tensile stress-strain curves between heat treated wires of one example high strength alloy (NiTiNbY) and of a straight-annealed binary NiTi alloy (Ni50.8Ti49.2). Data collected from both wires show similar strain recovery during this test with less than 0.3% residual after 6% tensile strain. The forward loading plateau stress of NiTiNbY is elevated to 1100 MPa compared to 650 MPa for binary NiTi, an increase of more than 65%. The unloading plateau stress of NiTiNbY is double that of binary NiTi for a typical shape set treatment. The axial elastic modulus of NiTiNbY wire is also about 40-50% higher than that of the binary NiTi. These performance characteristics are demonstrated by the curves in Figure 1.  Figure 2 shows another example, where 3 other NiTi based alloys were able to achieve upper plateau strength above 1.2GPa and lower plateau higher than 1GPa as shown in the illustrated stress-strain curves generated by testing of the materials listed for each curve. 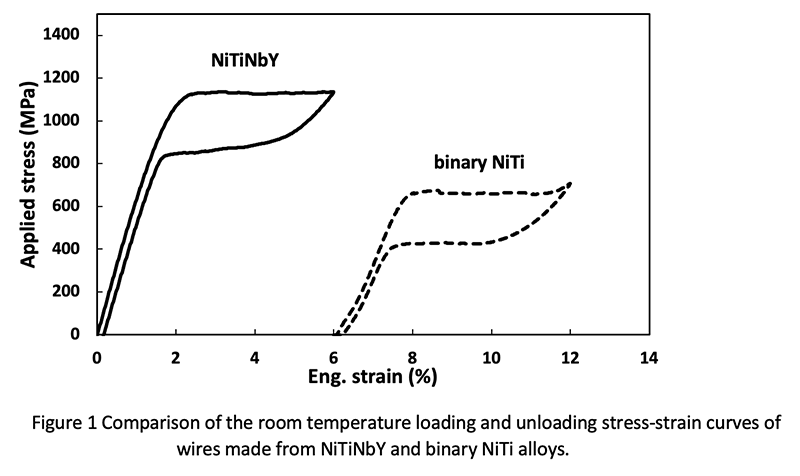 The high plateau stress and stiffness capabilities of these alloys can benefit device performance. For example, medical devices such as stents can use thinner wire or strut profiles with equivalent outward force. It is noteworthy, however, that engineers should design for durability with increased materials stresses in mind for permanent implants. Temporary devices such as vascular diagnostic and interventional guidewires incorporating these properties can exhibit improved push-ability, tip power, and torque, and thus provide improved handling, less wind-up, or thinner diameter with equivalent tip power. Orthodontic arch wires are another temporary application that can benefit from these higher performance nitinol alloys. Figure 3 shows data collected from an orthodontic arch wire made from NiTiNbY that can provide a bending force twice that of the binary NiTi, as shown in the illustrated stress-strain curves generated by testing of the materials listed for each curve. 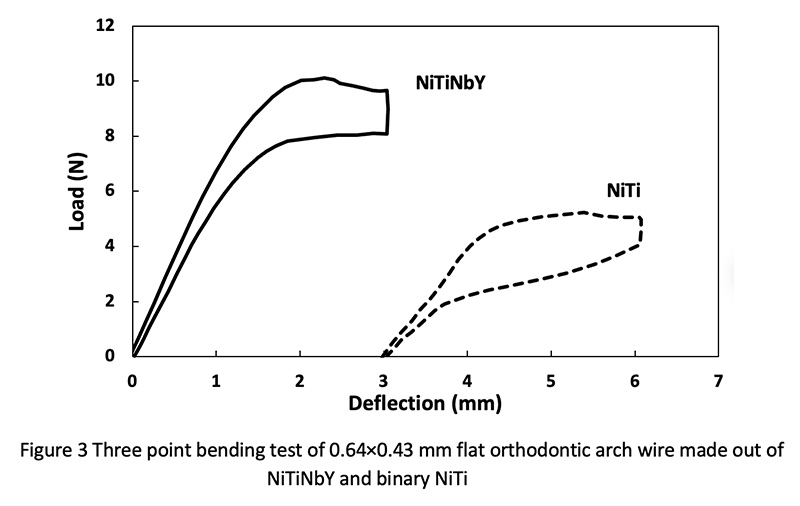 Superelasticity at cryogenic temperatures is another unique feature of these alloys that can provide application outside of the medical device space. Unlike typical superelastic alloys such as binary NiTi, which transform to martensite on cooling and “lose their superelastic response”, these materials maintain stable super-elastic recovery behavior even at extremely low temperatures. Figure 4 shows that the wire sample made from NiTi#9, a very cold binary SE alloy Ni51Ti49, and loses its super-elasticity at -130°C where the material is fully “martensitic”. In comparison, data collected from a NiTiNbY wire shows stable super-elastic behavior with an upper plateau strength above 600 MPa and ability to recover 6% axial deformation strain. This stable cryogenic super-elastic property can enable devices to function in extremely cold environments, which is critical for space exploration. Components produced from NiTiNbY can be programmed to maintain superelastic recovery from at least -130 to +100°C. If spring or textile-based tires were produced, for example, NiTiNbY alloy wire could enable a tire that is compacted for transit, deployed, and operated over a wide service temperature regime with high load-carrying capability. 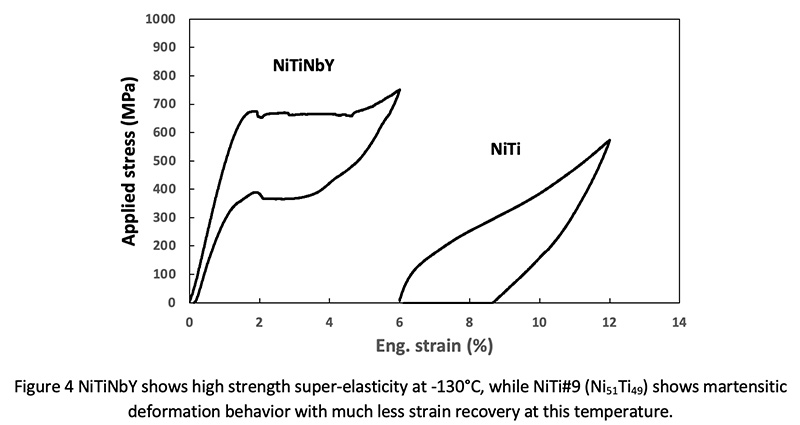 Currently Fort Wayne Metals Research and Development is accepting orders for NiTiNbY at diameters between 0.013 - 1.02 mm [0.0005 in – 0.040 in] If you are interested in trying some of this material or have any questions, please contact: [email protected]

If you have questions, or want to know more about other projects and innovations, we'd like to hear from you. Please contact us: [email protected]

For more updates, visit our Library of Updates

Disclaimer: Our updates are sneak peeks of what our R&D department is working on. This is not meant to imply that we have what is referenced above ready for robust serial manufacture.