The Amplatzer™ self-centering septal occluder revolutionized minimally invasive closure of atrial septal defects (ASDs) in children in the late 1990’s, and has served the role well from that time on [1]. Since the 1990s, Nitinol shape memory alloys (SMAs) have enabled high performance and less invasive treatment of aortic aneurysms, biliary ducts and cerebrovascular aneurysms. All such devices have relied on the remarkable combination of shape memory, superelasticity, corrosion and fatigue durability found in well-processed Nitinol wires and tubes.

Our Research and Development team is working as part of two cross-organizational teams to both design and standardize SMA for aerospace applications [2,3]. A key aim of our work is that aerostructural design engineers will, one day, be able to harness well-designed SMA in next-generation craft that will fly faster, while quieter over populace, and with greater efficiency over our oceans. 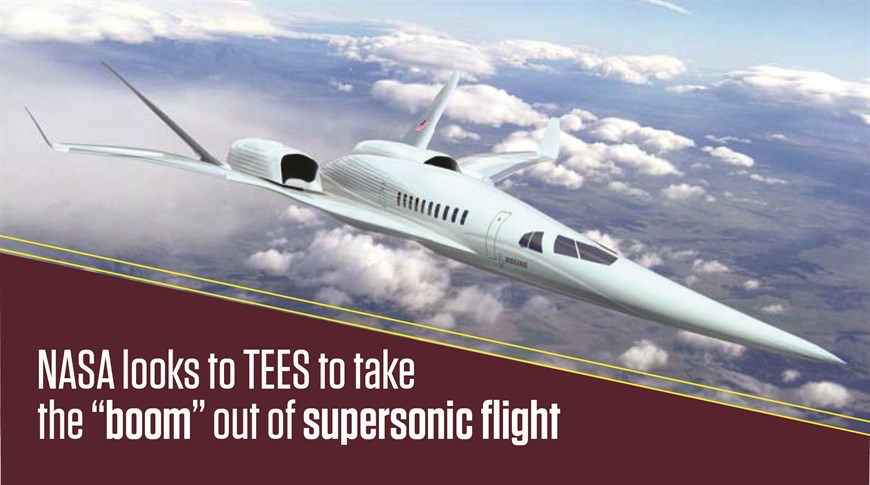 The Aérospatiale/BAC Concorde that plied the skies at up to Mach 2 from 1976 to 2003 may raise both positive and negative perception from young engineers. It’s supersonic capability further shrunk the world for its passengers, while noise, fuel efficiency, and questions around safety contributed to its retirement. One limitation of current design is that the outer mold line (OML), or the skin of the airplane, cannot morph as the plane transitions from subsonic to supersonic flight for example, or depending on whether it is over population or open ocean. Current generation hydraulics and electric actuators are not energy dense enough, and thus too heavy, to drive motion where it is needed.

The thermal strain recovery potential of SMA, which can exceed a stroke of 4% strain at temperatures beyond 500K in Nitinol alloys, can be designed into wire, tube, and multifilament forms capable of thermal activation and high-work density [4-6]. Today, and continuously since the 1990s, groups such as Boeing and NASA have actively sought to enable solid state actuators to drive both weight-savings and systems reliability [7].

Today, Fort Wayne Metals R&D is collaborating in a multi-organizational effort, including industry, academia and government, to leverage lessons-learned in SMA medical technology and help enable next-generation aerostructures that will run faster, quieter and with greater efficiency by enabling active morphing to control wing boundary layers and engine gas flow in sub- and supersonic regimes.

The application of lessons learned in medical SMA to aerospace is not such a stretch where the solution to certain key issues may provide cross-benefit. Contrast the blood flow in an aneurysm, and associated flow instability with turbulence that can contribute to noise and drag at an airfoil trailing edge [8,9]. Although the flow regimes vary widely, efforts in modeling and device development can bring crossover benefit to medical device recipients and aircraft passengers. At Fort Wayne Metals, we know that aspects of production and tuning of SMA that serve in hundreds of life-changing clinical procedures every day can be translated and applied towards scaling the technology for life-impacting aerostructural design – this is our aim.

Disclaimer: Our monthly highlights are sneak peeks of what our R & D department is working on. This does not mean we have what is referenced above ready for manufacturing.