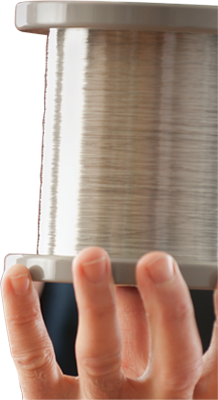 We’re all about
saving lives.

Our company was founded and continues to grow because of our dedication to the manufacturing of medical grade wire. Our mission is to continually improve the quality of our products, the speed with which we respond to customers’ requests, and our level of understanding of the materials we work with and recommend.

Fundamental to the success of our company are these basic values:

Customers are the focus for everything we do.

The commitments we make to them must be met. This includes both the quality of our products and the deliveries that we promise.

Continual improvement in processes and products is essential to our success.

We must continuously strive to improve everything we do: our products, the way our products are manufactured, the way we work together toward our goals, the efficiencies of our operations, and our profitability.

Research and development are keys to the future.

Because the industries we serve are rapidly changing, we must allocate sufficient resources to develop new products and processes. We are also committed to supporting our customers’ product development through sample orders and research projects.

We are a team. We must foster an environment of trust and respect to ensure the greatest contributions from all our people. The success of our company depends on the commitment of everyone toward our goals.

The conduct of our company must be pursued in a manner that is socially responsible and commands respect for its integrity. Our relationships with our customers, suppliers, and especially ourselves must be based on honesty and mutual respect.

Everyone must be accountable for producing to his/her potential each day.

We can only accomplish our goals if everyone is focused on their responsibilities each and every day. To do less is not respecting your coworkers, everyone must participate to reach our potential.

Information must provide the basis for decisions.

We are creating an innovative culture. We invite many opinions and all must be heard and respected. The way to choose which direction must be driven by objective evidence.

“Complete integrity, not only with customers and employees, but with suppliers, is always one of the greatest essentials in the proper conduct of a business.”
-Ardelle Glaze, 1960

It started with a single spark, an idea that formed in the mind of the late Ardelle Glaze who, at the time, was a former research scientist. The moment he established Fort Wayne Metals, Inc. a heavy emphasis was placed on research and innovation. He was a contributor within the wire industry from the start – one of his first ventures was improving a magnetic wire created for recording purposes. Although it was later replaced by the recording tape that we use today, that magnetic wire was just the beginning.

Ardelle continued his innovative spirit into the 1960s, when he developed and later received his first patent for the Drawn Brazed Strand (DBS®) that revolutionized leads.

With only five wire drawing machines and one furnace, Fort Wayne Metals Research Products Corp began to create the mold for which we set our wire drawing standards to this day.

In 1985, Ardelle’s son, Scott, was appointed CEO and has carried on his father's innovative mindset within the Fort Wayne Metals family. Soon after, Fort Wayne Metals developed DFT® composites that have enabled the ability to match dissimilar materials in order to provide a variety of properties in a single system called DFT® wire.

The new millennium has proved to be quite successful for Fort Wayne Metals. In 2002, we opened our first international facility in Castlebar, Ireland. After opening our Ireland location we shifted gears to focus on strengthening our international business relations. During this time, our innovative mindsets never faltered, we continued to develop new processes such as: 35N LT® (2003) and SLT® wire (2006).

So far the turn of the century has taken us further than we could’ve ever imagined. DPS™ was developed in 2011 for our customers who require a higher effective material stiffness in their Nitinol wire. And in 2013, new strides were taken and innovation hit new heights as we successfully performed our first Nitinol melt in our Columbia City facility. Although 2014 has brought us a surplus of new processes the most notable of them is 4TiTUDE™; this CP Gr 4 Titanium has brought new meaning to the term strength.

In 2021, we welcomed for the first time a minority partner – Axel Johnson, Inc. Headquartered in New York, the company is owned by the Johnson family of Stockholm, Sweden. The Glaze family continues to be the majority owners of Fort Wayne Metals, and our leadership remains in charge of day-to-day operations. As we look to the future, this long-term partnership based on shared values of growth, organizational integrity, employee development, community involvement, and sustainability will extend the depth of our resources and expertise to manage and bolster our position as an industry leader.

Check out our Resource Library.

Our strongest Gr.4 Titanium ever.

Need a CP Grade 4 Titanium with the strength of alloyed Titanium? Take a look at 4TiTUDE™.

Get the best of both worlds.

Used in a variety of medical devices, our DFT® composites allow you to combine the beneficial properties of multiple alloys in a single wire.

Let us do the straightening for you.

Fort Wayne Metals can save you time and effort by eliminating your need for mechanical straightening.